Eraserheads the Final Set …the burning of the Sticker Happy Piano.

There is a price for everything. Throughout the gig, it was noticeable in the close-up shots that Ely was not well. Francis M just died the day before. Its understandable. But a million more thoughts could be going in his mind. Lets remember that his mom died a few days before the first reunion concert.

In showbiz, these kinds of actions can be “scripted” but you can tell that Ely’s emotions were very true. He looked like he had angst towards the piano. He was beating the crap out of the piano after he burned it. Did he he feel partially responsible for the recent unfortunate events that happened? Was it too much to be a coincidence? Maybe. But still… 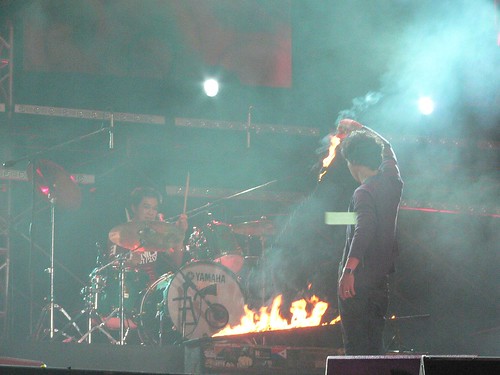 I love music. I have been a music-lover all my life. And just like every other Filipino, I love Anime too. But there is something about the two that doesn’t quite add up. Don’t get me wrong, I love original music from Animes. It adds to their kick-ass factor. But I hate AMV’s! AMV stands […]

I thought I lost it forever. I was looking for old PS1 games and saw my old tan Kartoon Chem cd containing six songs of which I don’t even know the title of some. Still pretty cool! I got it from a good friend who I think got it from KomArtSok around 04 or 05 […]

In Fairness To The “Gaddafi Performers”

Of late, reports are coming out that certain international pop stars performed for the Libyan leader. Now that Gaddafi is under heavy pressure from the international community, these performers are getting somewhat the same treatment. I think that’s unfair. Among the few named were Mariah Carey, Nelly Furtado and Beyonce Knowles. People have to work. […]