the internets, thoughts No Comments

Is HayMen dead? HayMen – Ang Blog Ng Tunay Na Lalake.
The blog sky rocketed to fame on April – May 2009. Every other blogger was talking about it and links were abundant in Facebook – some even coming from celebrities. But I noticed that HayMen is not able to sustain the the fame.

The blog also seemed to have internal conflicts among its writers as can be seen on its Facebook fan page weeks ago.

It was also very visible on their page that they are ranked Number 1 on TopBlogs.ph for several weeks running only to be beaten shortly by a blog housing Hayden Kho content during the Hayden Kho – Katrina Halili fiasco.

However, we can see that it is now on Number 2. Yes, it has been beaten again. And quite badly, too. It has about 5,000 less views than the top blog and it did not even generate half the traffic. In all fairness, the top blog contains sexual content so its not surprise how it creates traffic. 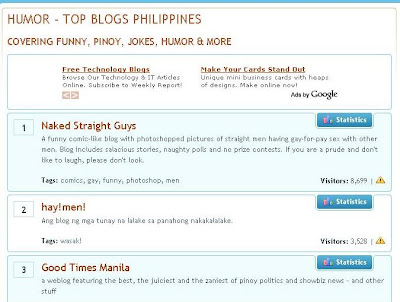 In my opinion, right after the internal conflicts it had, the blog went slowly but steadily south-bound. The original writers are not posting anymore and some of the crowd-loved content is gone.

What I loved was how they had surprising reasons in judging whether a particular celebrity was a TNL or not. Even being a bad ass didn’t guarantee a TNL stamp (as with some musicians like Ely Buendia and Raimund Marasigan of the Eraserheads or Basti Artadi of Wolfgang) yet other more mellow characters (like John Lloyd Cruz) were certified TNL. This kind of stuff kept people coming back. They also had posts every few hours back then.

But now, they are banking more on popular media and events – which I have nothing against. But I just wish they’d bring the old stuff back.

Amidst all the sad news around the music industry lately, I realize that experiences are really priceless. I realize that I am thankful that I was able to watch at least two live gigs of Bamboo when they were still intact. I tell you, the energy they have on tv and radio is multiplied at […]

Please Do Not Watch Tagalog Movies

Please Do Not Watch Tagalog Movies. The post title was glaring and called for attention. it begged to be read though the post is two years old. So I did… http://www.gwapito.com/please-dont-watch-tagalog-movies/ That is the URL of the article. I wont bother linking to it. The blog looked smart and informed enough though it was a […]

I Have A New Photo Blog

I recently created a new photo blog. Sice I enjoy blogging and I love pictures and taking pictures, why not create a photo blog, right? I’ve tried my hands on photography and image manipulation, I’m no good. But that won’t prevent me from taking as much pictures as I want. I love it. I also […]