Lourd De Veyra sings for local band Radio Active Sago Project. Though their words are appealing and amusing, I am not a fan of the band’s music all together. I don’t like what they did to Alkohol by the Eraserheads. But that’s another story. 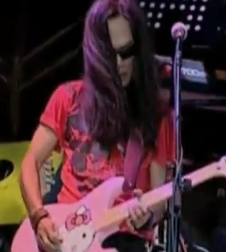 Marcus Adoro on The Final Set

With his band’s lyrical content, it did not come as a surprise to me to see that he is very opinionated about the country’s political and social scene – a trait seen on other artists lke Bamboo and Jim Paredes.

What made me take a deeper look in him was an article of him about my favorite attention-sucker Kris Aquino and her elder brother Noynoy. I am not a Noynoy fan. Maybe partly because, for me, he still has lots to prove. He can’t bank on genetics. And I doubt he’ll pull off something presidential on his own in the remaining months before election. But mostly because I saw him getting bullied by his little sister. This may be a little colonially-influenced but big brothers being bullied by their younger sisters are greeted with the thumb and forefinger in the forehead. And that’s how I saw it.

The way Lourd put it was very impressive.

First, rumors came out that Bamboo is quitting his band. But it was later clarified that he isn’t quitting, rather the group is disbanding. Now Sugarfree frontman Ebe Dancel is going his separate ways from his band and so is Champ Lui Pio from Hale. I know these guys are adults and they have thought […]

When you are passionate about certain things in life, you can’t help but combine them. I love weekend TV programming back in the early 90’s. We had clasics like Bioman, Maskman, Shaider (boo GMA for doing Zaido, its a disgrace to sir Alexis) and more. Thanks to YouTube, people my age can recall and re-live […]

Cause if they were shooting for smart and witty, they missed. They’re in the overgrown teenager genre – really angry about anything and trying to say everything popular is over-rated. They have lots of “the worst… in history” that actually include significant and not to mention, really good musicians. Note: calling every popular act a […]