Now Mr. Teodoro joins the race against other presidential hopefuls like Manny Villar and the brother of the massively annoying Kris Aquino – Noynoy Aquino.

Teodoro attained a Bachelor’s Degree in Commerce from De La Salle University in 1984. In 1989, he completed his law studies at the University of the Philippines, where he was awarded the Dean’s Medal for Academic Excellence. In the same year, he topped the Philippine Bar exams.

For seven years, he honed his skills as a lawyer in the EP Mendoza Law firm. He went to the Harvard Law School in Cambridge, Massachusetts for his Master of Laws and completed it in 1997. He was also admitted to the State Bar of New York during the same year. 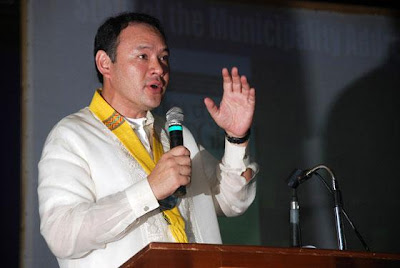 From 1998 to 2007 he was a congressman representing the First District of Tarlac province. He assumed the position of Assistant Majority Leader in the 11th Congress and head of the Nationalist People’s Coalition House members. He was also a member of the House contingent to the Legislative-Executive Development Advisory Council.

Following his three terms in office—the maximum number allowed by the constitution—he was succeeded by his wife, Monica Prieto-Teodoro.

Teodoro was appointed Secretary of the Department of National Defense in August 2007 at the age of 43, the youngest person to ever hold the position.

During his tenure as Defense Secretary, he appeared in a cameo role as himself in the soap opera Tayong Dalawa.

In March 2009 he announced his intention to run for President of the Philippines in the May 2010 election. A year earlier, he quit his old party Nationalist People’s Coalition to join the merged administration party Lakas-Kampi-CMD and cast his name in the ruling party’s contenders for the 2010 elections.

On September 16, 2009, voting 42-5 through secret balloting, the executive committee of Lakas-Kampi officially selected Teodoro as their party’s presidential standard bearer for the May 2010 elections, edging out the other nominee, MMDA Chairman Bayani Fernando. The announcement was made by Lakas-Kampi Secretary General Gabriel Claudio after a deliberation that lasted for approximately an hour.

Yahoo! Philippines shows support to those left by the late President Aquino on their logo as seen on their home page today. Its also notable that the top stories for the day are all on Tita Cory. The country is mourning on the loss of one of its great Mothers. May Cory find peace with […]

What is Globe IMMORTALTXT? This is a new promo from Globe after the extension of the prepaid expiry date. This is with Globe‘s new prapaid broadband SIM. In this promo, Globe Tattoo also offers the first SMS service with no expiry. IMMORTALTXT gives Globe Tattoo and Globe Prepaid subscribers 50 texts to Globe/TM plus 10 […]