I peaked at my reader subscriptions and saw a Paalam, baby post on Hay! Men! thinking its just another post with some funny anecdote. I thought they were going downhill and were having problems with commenters but this is still a big surprise.

The blog is wiped clean leave for the mentioned post. The league of ztarvuckz-loving Lil Zuplado, generic Mike Kosa lover, Muslim haters and emo kids might have gotten to them. Well, I wouldnt know for sure. The last post was made by Xyxo Loco, one of the first posters on Hay! Men! along with Chinaski and Kapitan Rakenrol. Those are the only original mods I remember.

And all this just after ther nomination for the Philippine Blog Awards 2009. And they were really big too. 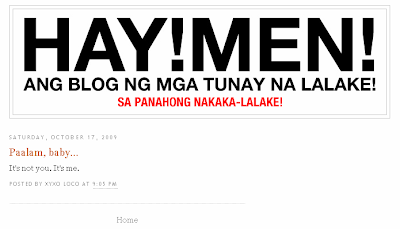 Ok there is someone uploading all the Hay Men posts: Hay Men Zombie

I am a huge, huge Incubus fan. I was introduced to their music back during Morning View by my college room-mate and I have been hooked on ever since. Anyway, I was watching Incubus covers on YouTube and I found several cover videos. I am no music expert but I reckon Incubus songs are pretty […]

Ok so I just thought. Think: In a Drug Rehab center. Of course there are drug addicts and recovering drug addicts. Their mind and bodies are physically and mentally craving for the drugs otherwise they go insane right? But we know they cannot be made to quit cold turkey. They have to gradually decrease their […]