The destruction of a local bridge in our humble city has left our bigger mall sorely unlikeable to a huge percentage of its patrons due to the hassle of commute. This is also the reason why I have not gone there more often in the weekend as much as I would like before.

Because of the horrendous traffic, I took a small self-vow not to go to the mall unless its really important or I have my own ride. But this weekend, I decided to go still to see 2012 with the gf. I heard it was really good. I was willing to go through the traffic for that movie.

But much to our disappointment, the line was feaking long. I figured I don’t mind standing and waiting until the next screening time because I’ll have to wati anyways but by the time all the other people who has queued before us were let in, a good portion of the story would have already been shown. No use waiting.

So we just walked around and thought of other things to do while we were there. Checked a couple of new cellphones and such, we did. As we were walking towards the food court, I noticed a very loud familiar but unusual for that place – live music, more specifically live band music. 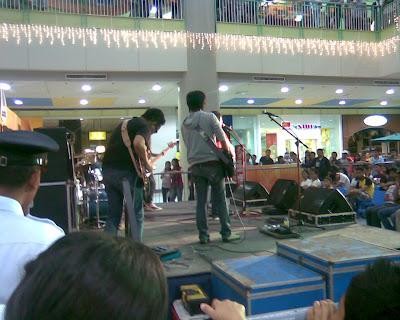 As we went through the few people watching, we noticed that it was local band Kenyo playing. The last time I saw them (or at least some of them) was when they were here years ago as Orange N Lemons. Needless to say, it was a good show. We caught just like three songs but hey, that’s good for something that’s free. 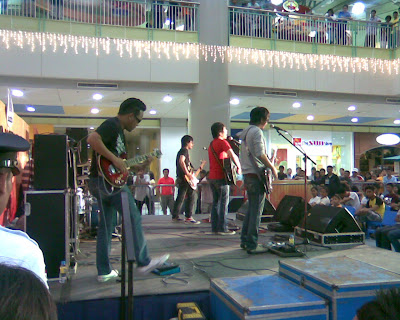 Though we were not able to stand in front of the stage, we were wicked close at the side. Twas good. Not a lot of people were clapping and at some point, the audience had to be asked to applause. This made me stand-out when I got there as I was clapping hysterically like crazy after every song. I alone.

This made me miss good old concert days. When bands and musicians came to town to perform full concert sets. Here in Batangas, were lucky if we have three to four concerts in year. The last concert I saw here was that Orange N Lemons show back in 2005. (I think) Whereas if I were in the Metro, I can watch good bands any night of the week. Oh well, at least I got to watch Kenyo for free.

After this, I had to do it again. Its just too… well, tragic. No pun or offense intended. I just saw this moments ago. This is the 2010 version of We Are The World. I checked the musicians who participated on the orginal We Are The World.http://en.wikipedia.org/wiki/We_Are_the_World Conductor * Quincy Jones Soloists (in order of […]

People should buy Legit Media even if Pirated Content is available

Watching tons of MJ-related stuff on TV and the internet kinda made me loose track of how it all began and what made him great – his music. I am a fan of his music. A great and gifted musician he is, no matter how screwed up he may be on other aspects of his […]