Yes we know that every blogger who is blogging for money is doing everything just to please the Big G. But there is another rising star we should notice: Its the Big T. Ok, it sounds kinda perverted. lol

When I reviewed my traffic for the day, I saw that 33% of all traffic came from Twitter. Facebook and Plurk combined didn’t even amount to half of that.

How does it work?

For traffic-spike keywords, all you have to do is tweet your post just before the event and during. Just tweet it when you think people are scrambling towards the search engines.

But I don’t want to tweet while watching the fight!! No problem, me too. You can set future tweets using Futuretweets. Just set the time and tweets and you’re done. I discovered Futuretweets through SEO master Marhgil Macuha. This won’t be as effective as tweeting while the event is happening though. I’ll explain later.

For regular posts, you can use Twitterfeed. Twitterfeed automatically tweets your post after you publish it. You can even set the refresh rate. I found this through BloggerBuzz.

But remember that you can always manually tweet your posts anytime you want.

Because Twitter is also a search engine. And it has one, very strong edge against Google –

The big difference – unlike SERP rankings for Google, SERP rankings for Twitter is based on one thing only – time. The latest tweets rank higher in the Twitter SERPs so its a good idea to tweet your link as often as you like. If the trending topic is really hot, your tweet can and will be buried in the SERPs in seconds.

Your tweets will be seen by all searchers even if they are not your followers. But don’t tweet too much though, you don’t want to flood your followers’ feeds.

This is Twitter’s edge – real-time results. Try it, you will see minute-old tweets popping up in Twitter searches.

Increase your Twitter power – use hashtags (#) and Trending Topics. If you’re really looking to boost your traffic from Twitter, check that chart at the right and use the keywords there on your tweet. These words are the high-traffic keywords for that moment. Even if they are not directly related to your post, if its somehow related, use your imagination and creativity and take advantage of that keyword. 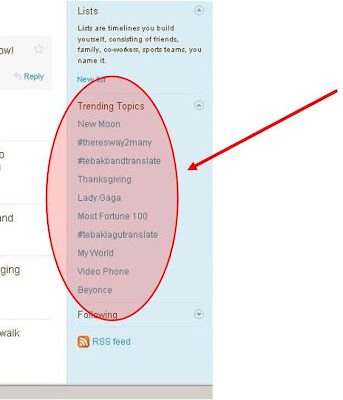 This is the reason why Futuretweets is less effective. You can’t hi-jack the hi-traffic keywords of that particular moment. Twitter Trends keywords are updated real-time. What’s hot right now might not be hot a few minutes later.

More plus points – a huge number of twitter users are from the US so that means American traffic. Twitter trending websites sometimes re-tweet your tweets too, so that’s more potential traffic right there.

Yes, I started my Great Google Migration today. After getting some responses from Google and thinking things through, I decided it will be best to do it now. I started migrating my accounts/blogs/services to a new all-Google username because of my recent troubles with Payee Names. I discovered a few things: No dual accounts. You […]

I have been using Blogger for so long and getting attached to it, its gonna be hard when I actually decide to use WordPress. That is if I stop being a cheapskate and decide to spend on hosting and a domain name lol! Anyway, one of the limitations of blogger is that its hard to […]

Man, this SEO thing is tricky and complicated. I thought it would be easy. Ok not that easy, but I didn’t think it will be this hard. Ok, if any other newbies might read this, I did not write this to discourage you or anyone. Even if its hard, its still fun and enjoyable! Trust […]