Out of curiosity, I checked out Arman Sanchez online. I wanted to see if they published news of his untimely death. I was surprised with what I found.

The website itself is pretty good. Its user-friendly and more importantly, its eye-candy. The design is very appealing. I thought to myself “Nice work, Web team!”

But the blog is another story. Make no mistake, I know political mudslinging is a part of a candidate’s campaign. Directly or indirectly, euphemized or not; politicians will always throw mud at each other. But the level of writing on arman2010.com‘s blogs were appalling. Its as if they hired showbiz columnists (and not very good ones at that) to write on their blog. I thought its supposed to be an Arman Sanchez blog, it turned out to be an anti-Vilma one instead.

The blog posts are full of hate and prejudice. That is not something you link from your campaign website homepage. Even worse, the accusations have no bases. It would be nice if they can link to videos or online articles or mention their sources. The blog was reduced to a cheap showbiz column. (And I thought his campaign didn’t want showbiz?) 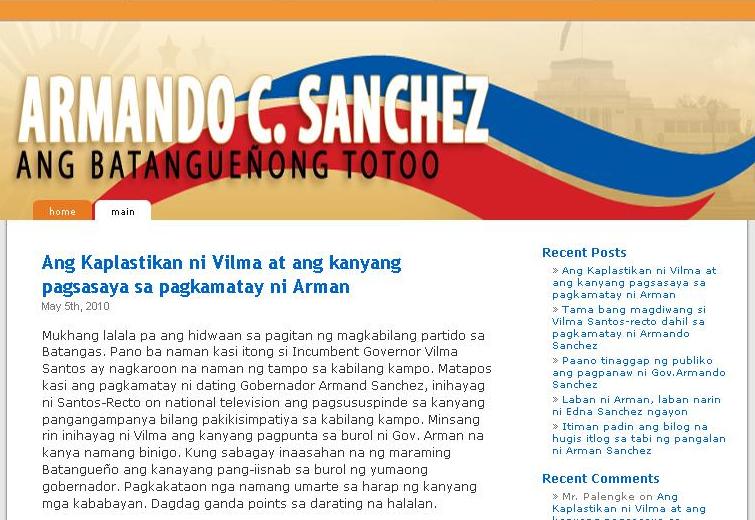 I have only read the latest entries and my observation might not be a reflection of the entire blog. I just can’t read on. Its too disappointing.

I don’t know if the blog posts actually came from the Sanchez campaign team or not. If not, they should explicitly indicate that.

I am not pro-Vilma. I never liked her as an actress nor as a politician. In fact, I am pro-Sanchez that’s why this is even harder and more disappointing for me.

A website is a brand’s face on the web. It is also a partial reflection of the body as a whole online and offline. Is this how this campaign is ran? With blind accusations and harsh, unprofessional statements?

The former president died this morning at 3:18 am. While it is no secret that I do not like Kris, I have a lot of respect for Cory. She was the president when came into consciousness, she was the first president that I knew. Though I have no special fondness of her, I am kind […]

Have you ever stumbled upon a blog and only liked posts on a certain topic and find it a hassle to subscribe to all blog posts? If so, I can help you. I found a neat little trick to subscribe just to specific labels or categories on a certain blog. Keep in mind that this […]