Here is my 2 cents on the whole fiasco.

Seems the story was made to be followed and talked upon by people. Almost like it was scripted.

Actor’s parents’ car got stolen.
Other expensive cars get stolen too.
Suspect turns out to be a group of young rich kids.
They had a gunfight with the police.
Leader is wounded.
Leader dies.
But leader didn’t die of gunshot wounds. (or so they say)
Leader dies because of some sort of choking.
Police is naturally blamed.
Police blames media.
Network giants haul “attacks” at each other.
Network giant defends himself.
Police says sorry.

But what I am concerned about is this.

And just hours ago in TV Patrol, they even had a timer indicating the “delay” caused by the news team. It amounted to 55 seconds.

It does not take a medical expert to know that every second counts in a life or death situation. And ABS-CBN, with permission from the PNP in the scene, just wasted 55 of those precious seconds for footage of a dying man. The footage may have been “gold” in media standards but at what cost?

The guy can barely speak. He can’t even say his name clearly. He’s literally bleeding to death and reporter asks him where he has been hiding for the past few days?? And the cops let them? The cops knew that Ivan was shot in the head and can barely move, why was he not taken to the hospital immediately?

Medical attention is a basic right to every citizen. Hell, even convicted prisoners deserve medical care. Ivan was a carjack group leader (presumably) – a suspect. He still deserves medical care. Medical care that was not given.

The news about Ivan dying of asphyxia is another issue all-together. What happened before and after Ivan’s “interview” no one can really tell except for the people who were there. 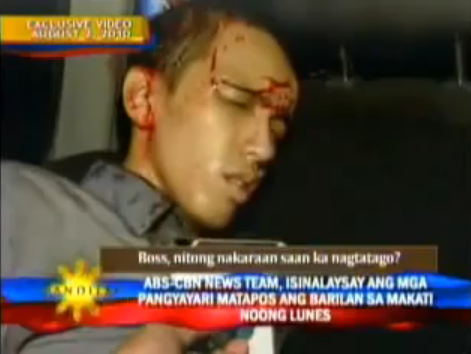 Dude is literally dying and people ask him where he was hiding? No one thought of taking him to the hospital immediately?

Disclaimer: I am not a fan of Ivan. Nor do I have any problems with the police’s way of arresting him. If Ivan wants a gunfight, then give him one. My concern is what happened after that.

Because They Are Underrated. – Dashboard Confessional

I love it when bands can perform as good as the CD or even better live. A lot of today’s musicians suck live its an insult to music fans. Anyway, one of today’s most underrated acts has got to be Dashboard Confessional. Even if their music is not your cup of tea, I doubt you […]

1. Candidates just end up bitching about each other. We don’t need to see their wits against an opponent’s personal issues. Sure they start up with a “issue at hand” but every statement just ends up becoming a personal attack. Sure they’re all smart and all that and they have plans, platforms and all that […]

Racism on the Internet

I was watching an innocent Street Fighter IV video and as numerous popular videos would have it, there were some flaming in the comments. I checked the comment and the profile of the person who made the comment and I was, let’s say, surprised to the very least. I found a 50-year-old roaring,conservative mother from […]