Since Jailbreaking Is Legal

In the mid of this year, the US government made Jailbreaking you Apple iOS device legal. I just noticed a little something…

Now look at this article by PC World showing a comparison between the iPad and the Samsung Galaxy Tab. I have no special interest on either device and I didn’t even read the whole thing. But I did check out the chart comparison of the devices on the right. *ahem – obvious pwnage by samsung – ahem* 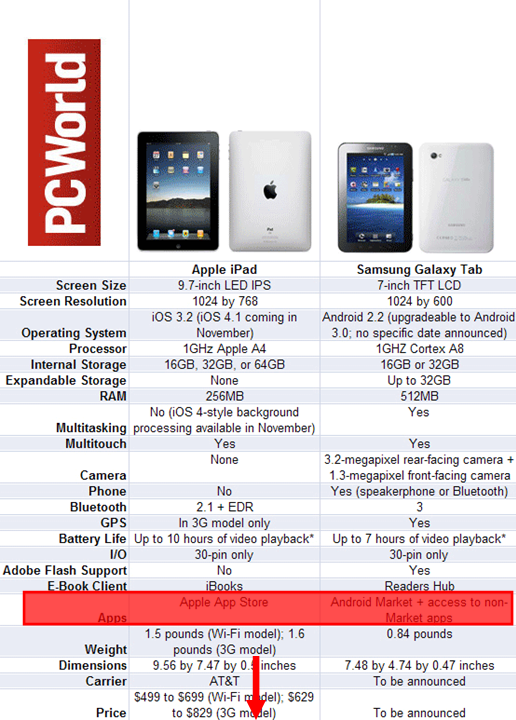 *small spreadsheet rant : they didn’t even align the text in the cells!!!*

Since PC World was so nice to mention the “access to non-(Android)Market apps,” why didn’t they mention the access to Cydia? Since jailbreaking is legal, your iOS device isn’t imprisoned by the App Store anymore.

Yes, Cydia may be a gateway to cr*cked apps but when you think about it, using a vague term “non-Android Maket apps” can pertain to cr*cked software too.

The only difference I can think of is that non-Android Market apps might be available from-the-box. Whereas you have to jailbreak your iPad first to access Cydia. Otherwise PCWorld is just bias against Cydia. What do you think?

iPod Touch 2G OS 3.0 Not Available in the Philippines Yet

After anticipating for over a month, I was really excited to see that the iPod Touch 2G OS 3.0 upgrade was already available. But when I clicked the Update button, this happened: Just when it said on the button that its already available. Way to go, Apple.

Oftentimes, when a guy lands his first job, talks about fun-times and what-to-buy ensues. But here is one thing any guy should consider getting when he lands his first job. And you’d never expect what it is. Men, I implore you to consider buying yourself a nice Barong Tagalog. Yes, that’s right. (or if you’re […]

Mo Twister and the Azkals

Mo Twister is getting heat from the fans of local football stars the Azkals. Normally, I would not side with a loud-mouth and showbiz talk show host. But he does have a very strong point. I do believe that the Azkals are getting way too much attention. Yes they ‘introduced’ a new sport to the […]