I Want A Nissin Di622 Mark II With Cup Noodles

The other day I went out with a few friends. We brought our cameras to take a few pictures over cups of coffee on a nice evening.

My friend brought his camera (sure enough it’s a Nikon D90) with a giant monstrosity attached to it. 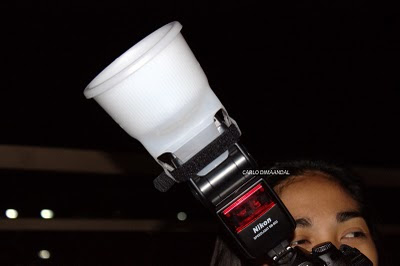 That’s my other friend who was with us.

I had wanted to buy an external flash for the sole reason of eliminating harsh lighting and shadow caused by the built-in pop-up flash. I had tried some home-made flash solutions that work but now I have more reason to get a real, external flash.

Aside from money, one of the reasons I haven’t seriously considered to get an external flash is that I’m not really familiar with all the technicalities and terminologies in acquiring a new flash. But seeing my friend’s flash has ‘forced’ me to read up on the matter.

During our coffee evening, I just realized the possibilites that you have when you can remotely fire a flash wirelessly. It’s like a revelation. (yes, I’m that much of a noob) My friend showed me a nice photo that he took with the flash just on top of the table. Since it was dark, it had a very nice effect.

Another friend mentioned stuff about external flashes being triggered by the pop-up flash, but my thoughts were so boxed in studio shooting at the time that I didn’t realize the possibilites then. He said that the pre-flash would ruin an external flash’s triggering mechanism. It’s actually one of the reasons I wanted to learn how to turn-off the pre-flash too.

Anyway, I totally want to buy an external flash now. Or course, if we ignore monetary constraints, first choice would be a Canon Speedlite. I was looking at the mid-range Canon 430 Ex II but it costs Php 13,000! The flagship model Canon 580 Ex II is well over Php 20,000. No way can I afford that. Even if I can, I don’t have the knowledge and understanding to maximize it yet.

So I looked at third-party brands and saw different ones. After careful deliberation, I have set my heart on the Nissin Di622 Mark II. That’s a newer version of the Nissin Di622. (hence, Mark II) It’s a mid-range third-party flash set to compete with Canon’s 430 Ex II.

The Nissin Di66 Mark II lacks an LCD screen but it packs in more features than its predecessor. It will also set you back around Php 1,500 more than the older model.

After reading for a few hours and learning a little bit about camera flashes, I now actually prefer this model more than it’s Canon counterpart, the 430 Ex II. Why? The Canon 430 EX II has no optical slave capability. It can only be triggered remotely via radio wireless configuration. This made me choose the less expensive Di622 Mark II.

And the cup noodles? That’s called a Lambency Flash Diffuser. Honestly, I’m not that familiar with flash diffusers too. Browsing through online photography stores made me realize that there are many different kinds of flash diffusers and I am yet to learn what each one is for. But two of my friends got a this ‘cup noodles’ diffuser as their first external flash diffusers so I am leaning towards this too. 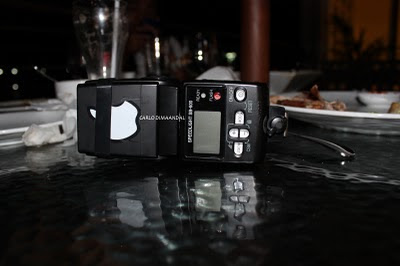 Greatest Challenge Yet – Getting People To Pose

I am an introvert. I am very shy. I have difficulty socializing and communicating at certain levels. This trait poses a great hindrance to my hobby. Often I’d like to ask people to pose but I just get too shy. Aside from me being an introvert, another thing that bothers me is this – when […]

If you are a hobbyist (of aything – photography, guns, pets, fishing etc.) 10 – 15 years ago, the only way you’ll information on your interest is by (physical) networking with your fellow local hobbyists, travelling the distance to someplace where there are more like-minded people or buying a crap-ton of magazines and printed resources […]